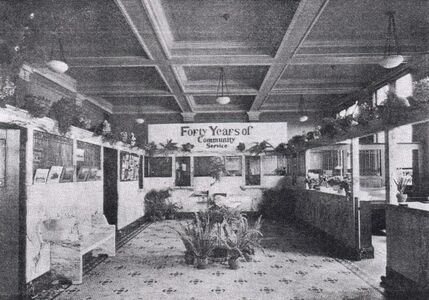 Photograph showing the First National Bank Lobby as it looked in 1929. 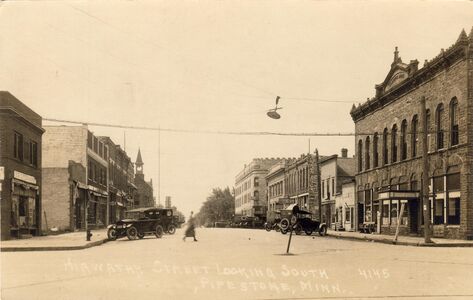 circa 1920 Postcard showing the Commerce Block (on the right), home of the Bank of Southwestern Minnesota, and Stoner & Mylius, Bankers from 1885 to 1889

The first bank in Pipestone was a private bank established by C.C. Goodnow and J.E. Craig in November of 1879. [2] 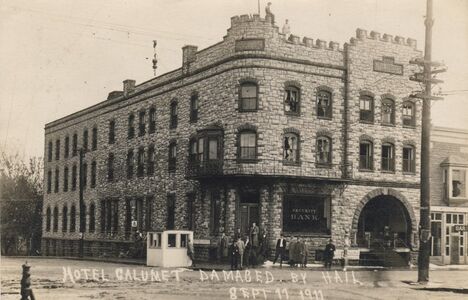 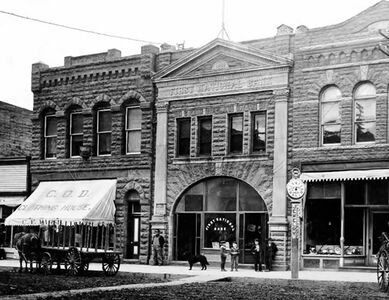 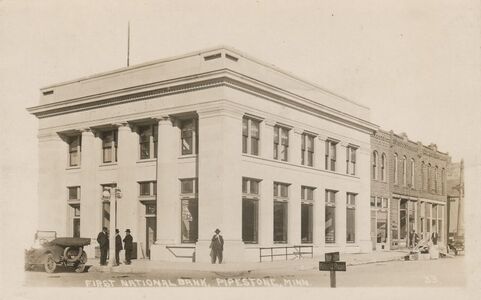 The First National Bank's history can be traced back to around October of 1884, when two Englishmen, W.G. Stoner and Charles Mylius organized a private banking firm in Pipestone, originally called the Bank of Southwestern Minnesota. The bank opened for business on July 21, 1885 with Charles Mylius as President, and Henry E. Briggs as Cashier. The bank was located in the Commerce Block at 120 N. Hiawatha (which later became the Royal Hotel, and much later was torn down in 1961 and became the drive-thru bank and parking lot for First National). To comply with new MN regulations (which went into effect June 1, 1888) making it illegal to operate a Private bank under a Corporate (artificial) name, the bank's name was changed to Stoner and Mylius, Bankers at some point prior to January of 1888. On October 25, 1888, W.G. Stoner sold his interest in the bank to Mylius, and for a few months, the bank's business was conducted under the name of Charles Mylius and Company. [2] [3] [4] [5] [6] [7] [8]

After the original Calumet Hotel (built by the Close Brothers in 1883) was completely destroyed by fire on December 15, 1886, Stoner and Mylius decided to build a new Calumet Hotel, which would also house their bank. Construction began in late 1887, and the Hotel's grand opening was held on Thanksgiving Day, November 29, 1888. The bank occupied the corner of the hotel building. [9] [10] [11] [12]

On November 28, 1888, Charles Mylius met with several prominent Pipestone citizens to discuss organizing a National Bank. A resolution was adopted, and a Board of Directors appointed including Charles Mylius, Charles J. Cawley, Ambrose S. Dyer, William G. Martine, Henry E. Briggs, Hiram E. French and Richard W. Ashton. Charles Mylius was chosen President, C. J. Cawley V.P, and H. E. Briggs Cashier. On February 25, 1889 the organization was approved by the Comptroller of the Currency, and the First National Bank of Pipestone was granted Charter 3982. The Bank opened for business on February 28, 1889, and all accounts of the previous bank were transferred to the new bank on March 4, 1889.

The original stockholders of the First National Bank were:

During the National Currency Era (up to 1935), the First National Bank survived several economic crises that closed many other banks. This included the Panics of 1893 and 1907, the intense inflation followed by the drastic deflation following WWI, and the Great Depression of the 1930s. [13] [14] [6]

The following Types of bank notes were issued by this bank:

Illustrated Overview of the bank notes Issued by this Bank

Retrieved from "https://banknotehistory.mywikis.wiki/w/index.php?title=First_National_Bank,_Pipestone,_MN_(Charter_3982)&oldid=8759"
Categories:
Cookies help us deliver our services. By using our services, you agree to our use of cookies.