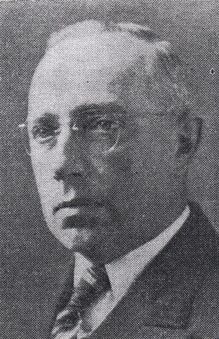 August Henry Jansen was born February 27, 1887 to Andrew H. and Mary C. (Hansen) Jansen in Dysart, Tama County, IA. By 1900 the Jansen family had moved to Jackson Township in Crawford County in western Iowa. August received his education in schools in Tama County and Manilla, IA. 1,2,3,4

A.H. Jansen's banking career began in 1908 when he came to Pipestone County to take a position in the bank at Trosky for a short time. He then moved to Crofton, NE, where he was Assistant Cashier at the Farmers State Bank from 1909 to 1914. In 1914 he moved to Edgerton, MN to become the Cashier in the Edgerton State Bank, a position he held until 1920 when he was elected President. He served as President of that bank until at least 1941. In January 1933, he accepted the position of Cashier at the First National Bank in Pipestone, and served in that capacity until 1939. He then served as Vice-President and was a member of the Board of Directors of First National from 1939 until he retired in 1954. 3,5,6,7

While living in Edgerton, A.H. served on the Village Council, and was a member of the School Board. In 1931, he was elected President of the 2nd District Group of the Minnesota Bankers Association. 3,5

When he retired in 1954, Mr. and Mrs. Jansen moved to Long Beach, CA, where they lived until A.H. Jansen passed away at the age of 78 on March 4, 1965. He is buried in a mausoleum in Westminster Memorial Park, Westminster, Orange County, CA. 1,9

During his banking career, A. H. Jansen was involved with the following bank(s):

Retrieved from "https://banknotehistory.mywikis.wiki/w/index.php?title=August_Henry_Jansen_(Pipestone,_MN)&oldid=8116"
Categories:
Cookies help us deliver our services. By using our services, you agree to our use of cookies.