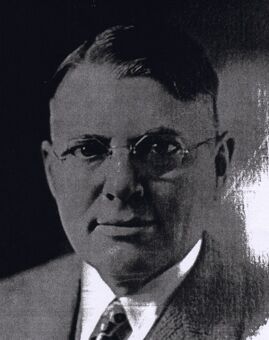 William Towner Morgan was born in Sweet Township, Pipestone County, MN to Joseph Homer and Susan (Maxwell) Morgan on May 29, 1883. His early education was in rural schools, where he was only able to attend class sporadically, since he was needed on the farm. After the family moved to Pipestone in 1898, Will completed his education, graduating from Pipestone High School in 1904. [1]

Mr. Morgan began his banking career in 1905, taking a position as a clerk in the Trosky Bank, and after working there for several months took a similar position at a bank in Doon, IA. He soon returned to Pipestone and started work as a bookkeeper at the First National Bank in April 1906. W.T. was then appointed to the Board of Directors in 1908 when C.J. Cawley resigned, and elected Assistant Cashier in Jan 1909. He served as Cashier from August 13, 1919 to January 1921 and then again from 1928 until his death in January 1933. He also served as Vice-President from 1920 to 1933. [4] [5] [6] [2]

During his years in Pipestone, W.T. was active in the community, and served in positions of trust. He was City Treasurer for 10 years, and served as a member (and Treasurer) of the city Board of Education. In May of 1932 he was elected President of the 2nd District Group of the Minnesota Bankers Association, and later that year became President of the County Bankers Association, holding both of those positions at the time of his death. [2]

During his banking career, W. T. Morgan was involved with the following National Bank: [8]

Retrieved from "https://banknotehistory.mywikis.wiki/w/index.php?title=William_Towner_Morgan_(Pipestone,_MN)&oldid=6837"
Categories:
Cookies help us deliver our services. By using our services, you agree to our use of cookies.