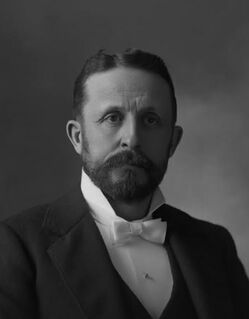 William Frost was born March 1856 in Hadleigh, Essex, England and emigrated to the U.S. in 1883. He settled that same year in Pipestone, and started the Frost and Powell Furniture Store with Alex Powell. 1,2,3

In 1900, he was running a Hardware Store, and in the 1905 time frame, in addition to banking, he was also farming at his Grange township farm. 1,7

In January 1903, William Frost became Cashier of the First National Bank of Pipestone, and served in that capacity until January 1909, when he became Vice-President. He stayed active in the bank until he and his wife and son moved to Los Angeles, CA in the fall of 1913. He remained a stockholder in the First National Bank of Pipestone for the rest of his life. 3,8,9,10,11

Mr. Frost was also a contractor/builder. He built several of the buildings in Pipestone's Downtown Historic District, including the Calumet Hotel (with C. Smith) in 1887-1888, the Cheverton/IOOF Block in 1889 (115 W. Main, now the Hobby Shoppe), and the Clymer Block in 1890 (114 W. Main, now the Second Edition thrift store). 5,6

During his banking career, William Frost was involved with the following bank(s): 12

1882 $20 Brown Back with pen signatures of Wm. Frost, Cashier and W.C. Briggs, President

Retrieved from "https://banknotehistory.mywikis.wiki/w/index.php?title=William_Frost_(Pipestone,_MN)&oldid=8105"
Categories:
Cookies help us deliver our services. By using our services, you agree to our use of cookies.