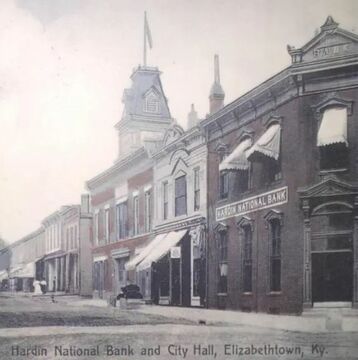 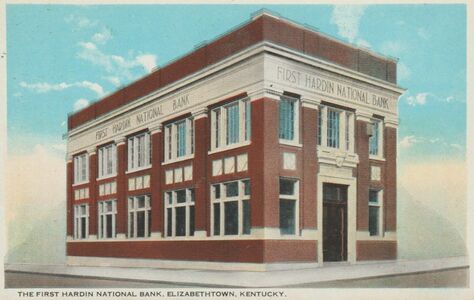 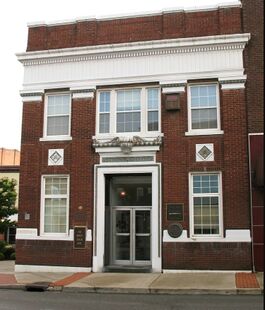 Elizabethtown is the county seat of Hardin County, Kentucky, about 15 miles south of Fort Knox. In 1793, Colonel Andrew Hynes had 30 acres surveyed and laid off into lots and streets to establish Elizabethtown. Named in honor of his wife, Elizabethtown was legally established in 1797.

During the Civil War, Confederate General John Hunt Morgan and his 3,000-man cavalry attacked Elizabethtown on December 27, 1862. Although he successfully captured Elizabethtown, Morgan's chief goal was to disrupt the railroad and northern transportation. He proceeded north along the railroad, burning trestles and destroying sections of the track.

In the aftermath of the Civil War, no banks were established in Elizabethtown until the mid 1870s. By the late 1870s, there were 2 private banks in town, the Banking House of L.M Longshaw, and Arnold, Polk, and Co. There was intense competition between the two banks, which ended in a gun fight between Philip Arnold and Harry Holdsworth, a clerk at Longshaws, with Arnold dying of his wounds six months later. Philip Arnold was the con-man who pulled off the 'Great Diamond Hoax' swindle of 1872. Here is a link to more information on Arnold and the Diamond Hoax.

In 1880, Conrad Hotopp purchased the banking interests of L.M. Longshaw. He kept clerk Harry Holdswsorth as his cashier, and they established the banking business of Hotopp and Holdsworth. A couple of years later, Holdsworth skipped town with about $5,000 of the bank’s money. The news of this spread through town quickly, which triggered a run on the bank. President Hotopp personally guaranteed the depositors money, which defused the crisis.

The First-Hardin National Bank would survive past the end of the National Bank Note Era in 1935, and would eventually be acquired by PNC Bank, Kentucky, Inc. on June 19, 1992.

Retrieved from "https://banknotehistory.mywikis.wiki/w/index.php?title=Hardin_National_Bank/First-Hardin_NB,_Elizabethtown,_KY_(Charter_6028)&oldid=9023"
Categories:
Cookies help us deliver our services. By using our services, you agree to our use of cookies.