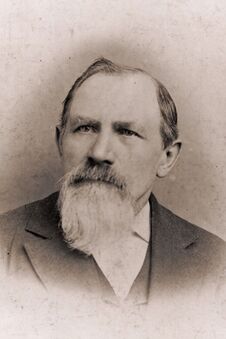 Conrad Christian Hotopp was born in the village of Lengede, State of Hanover, Germany, on May 24, 1832, to Julius Hotopp and Juliane Voges.

Conrad was trained as a shoemaker. Finishing his four year apprenticeship in 1850, he spent the next four years learning his craft working in various towns around Germany. In September 1854, he and his brother Christian emigrated to America. After an ocean voyage of ten weeks, during which they earned their passage by doing hard unskilled shipboard labor like scrubbing decks and painting, they arrived at New Orleans in December 1854. The first thing Conrad did was purchase a German – English dictionary. Using this and the daily newspapers, he taught himself English.

In the summer of 1855, Conrad and Christian, who was a tailor, traveled up the Mississippi and Ohio rivers to Louisville, Kentucky where there was a large German community. Conrad worked for a German shoemaker in Louisville for the next four years. During this time he met his future wife, Elisabeth Scheurer, who was also born in Germany.

Conrad moved to nearby Elizabethtown on September 25, 1859, where he bought a boot and shoe business. He and Elisabeth were married on November 3, 1859, and around that same time, Conrad also became an American citizen. Conrad worked hard and prospered with his shoe and boot making business. He had a difficult time during the Civil War (1861-65) because, like most Germans in America, he openly supported the Federal Government in Washington even though most people in Elizabethtown favored the southern states.

In August 1869, a fire consumed much of Elizabethtown. Conrad Hotopp’s home and business were totally destroyed. As soon as the ashes cooled, he started to rebuild. Three months after the fire, he had a new shoe factory and home and he was rapidly recovering from his loss. 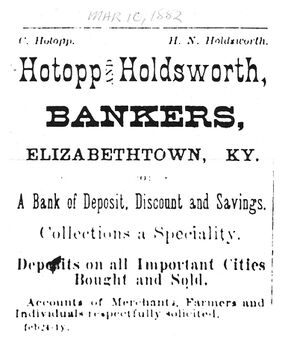 Conrad was very successful with his shoe business, and branched out into banking in the 1880s

In 1880, Conrad Hotopp purchased the banking interests of the Banking House of L.M. Longshaw in Elizabethtown. He kept clerk Harry Holdswsorth as his cashier, and they established the banking business of Hotopp and Holdsworth.

A couple of years later, Holdsworth skipped town with about $5,000 of the bank’s money. The news of this spread through town quickly, which triggered a run on the bank. Conrad personally guaranteed the depositors money, which defused the crisis. Eventually Conrad recovered much of the lost money through the courts and laying claim to Holdsworth's house.

While serving as President of the Hardin National Bank, Conrad continued working at his shoemaking business until he made his last pair of shoes in 1909. In addition to the shoemaking business, he also owned the Elizabethtown Milling Company.

Hotopp took an active part in the affairs of the town from the beginning, serving many years on the Board of Trustees. He was also considered the founder of the town's public school system. Elizabethtown became one of the first towns in Kentucky to have a tax-supported school, largely due to the efforts of Conrad Hotopp.

Even in his very old age, Conrad would go to the bank and be available to the townspeople, giving advice on investing, etc. He was gravely ill several times in the last ten years of his life, but he bounced back remarkably well. Three days after the new First-Hardin National Bank building was dedicated in 1922, Conrad Hotopp died on May 28, 1922 at the age of 90, and is buried in the Elizabethtown City Cemetery.

For a more detailed biography of Conrad Hotopp, see this link

During his banking career, Conrad Hotopp was involved with the following banks:

Retrieved from "https://banknotehistory.mywikis.wiki/w/index.php?title=Conrad_Christian_Hotopp_(Elizabethtown,_KY)&oldid=6969"
Categories:
Cookies help us deliver our services. By using our services, you agree to our use of cookies.