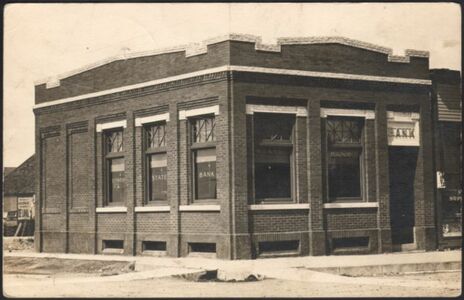 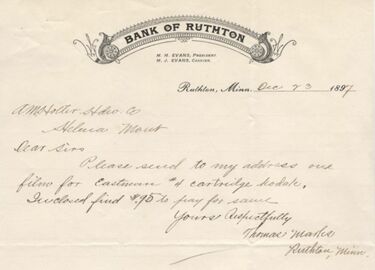 1897 Bank of Ruthton letterhead. This bank was succeeded by the First National Bank in 1901.

Ruthton is located in Pipestone County in southwestern Minnesota. The town was platted in 1888, and was named for the wife of one of the founders. A post office has been in operation at Ruthton since 1888, and the town was incorporated in 1897.

Ruthton's first bank was the (private) Bank of Ruthton, established in 1897 by Milo J. Evans of Sac City, Iowa. The Bank of Ruthton was succeeded by the First National Bank in 1901.

During the farm crisis of the 1970s, two Ruthton bankers were murdered by a man who had lost his farm, Jim Jenkins, on September 29, 1983. Jenkins, along with his son Steve, managed to lure the president of the Buffalo Ridge State Bank in Ruthton, Rudy Blythe Jr., and the bank's loan officer, Toby Thulin, onto a lonely farmhouse road where Jenkins murdered both bankers. 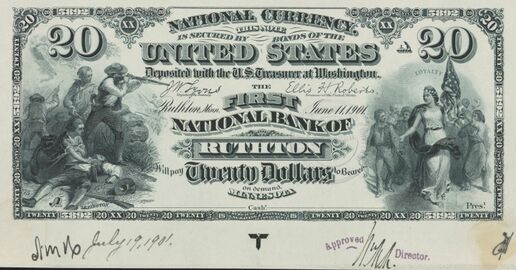 No surviving bank notes are currently known from the First National Bank of Ruthton, MN. Shown here is a Certified Proof of a Ruthton 1882 Brown Back $20 bank note (before the Seal/Charter# and Serial# overprints were added). Courtesy of the Smithsonian Institution.

Retrieved from "https://banknotehistory.mywikis.wiki/w/index.php?title=First_National_Bank,_Ruthton,_MN_(Charter_5892)&oldid=8514"
Categories:
Cookies help us deliver our services. By using our services, you agree to our use of cookies.