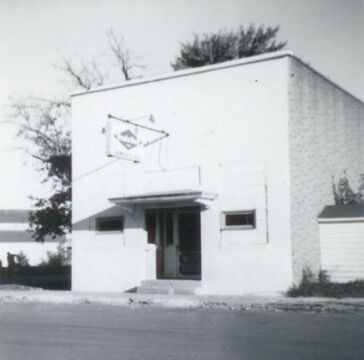 Holland is located in Pipestone County in Southwestern Minnesota. The town was laid out in 1888, and incorporated in 1898. A post office has been in operation at Holland since 1889. The town got its name due to a large share of the early settlers being natives of Holland.

Holland's first bank was the (private) Bank of Holland, established in 1899 by Harris & Jacobs. 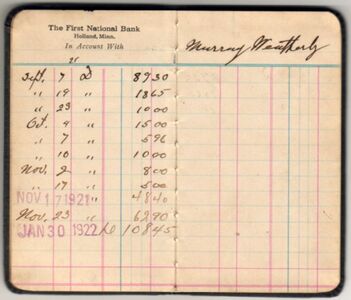 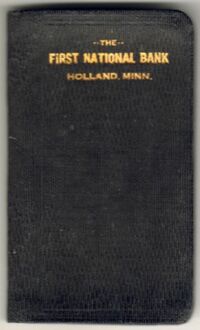 The First National Bank of Holland was organized by a group of citizens in 1920 with a capital of $25,000. A new bank was built on the north side of Main Street (pictured above), and opened for business that same year. Ambrose Holland was the first Cashier, and Paul Reikow the first President. The First National Bank was robbed twice, once on Sept 11, 1928 of $1,511, and again on April 27, 1933 of an unknown amount. During the 1933 robbery, Mr. Reikow was shot in the right knee while exchanging gunfire with the robber. The bank was closed by FDR on March 6, 1933 for the National Bank Holiday, and was never licensed to re-open. It went into Conservatorship on April 20, 1933, and was officially closed by the Receiver on December 8, 1933.

No National Bank Notes were issued by this bank.

Retrieved from "https://banknotehistory.mywikis.wiki/w/index.php?title=First_National_Bank,_Holland,_MN_(Charter_11724)&oldid=8757"
Categories:
Cookies help us deliver our services. By using our services, you agree to our use of cookies.