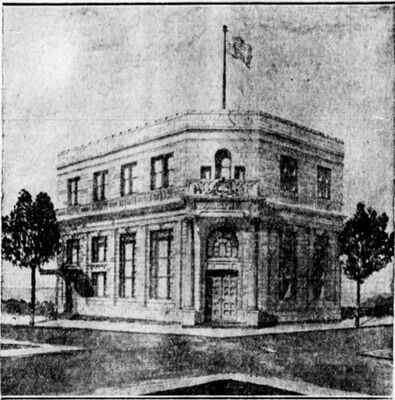 Sketch of the West End National Bank of Shamokin, Pennsylvania, prepared by the architect in 1926. The new bank was located on Walnut and Second Streets in Shamokin. 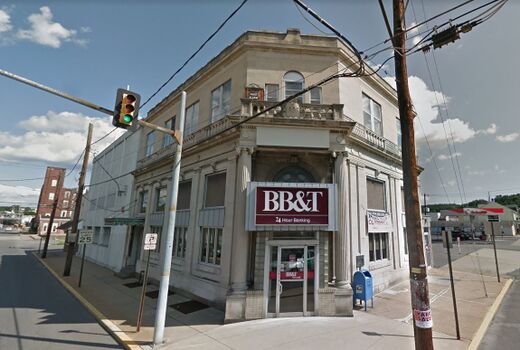 Shamokin (/ʃəˈmoʊkɪn/; Saponi Algonquian Schahamokink, meaning "place of eels") (Lenape Indian language: Shahëmokink) is a city in Northumberland County, Pennsylvania, surrounded by Coal Township at the western edge of the Anthracite Coal Region in central Pennsylvania's Susquehanna River Valley. It was named after a Saponi Indian village, Schahamokink. At the 2020 Census, the population was 6,942.

The first human settlement of Shamokin was probably Shawnee natives migrants. A large population of Delaware Indians (also known as the Lenapes) were forcibly resettled there in the early 18th century after they lost rights to their land in the "Walking Purchase" along the eastern border of the colonial Province of Pennsylvania in the upper northern reaches of the Delaware River in 1737.

The city of present-day Shamokin lies along Shamokin Creek. Shamokin was founded in 1835 by the coal speculators John C. Boyd and Ziba Bird, it was early known as Boyd's Stone-coal Quarry, Boydtown, and New Town. The discovery of anthracite coal resources in the region, became the basis of much industry. Railroad companies, such as Reading Railroad, bought interests in coal and became major employers of the area, building railroads to ship coal to markets and controlling most jobs.

Shamokin was incorporated earlier as a borough under the Commonwealth constitution on November 9, 1864, and subsequently as a city 85 years later, on February 21, 1949. In addition to anthracite coal-mining, it became an industrial center in the 19th century, with silk and knitting mills, stocking and shirt factories, wagon shops, ironworks, and brickyards. The dominant Eagle Silk Mill became the largest textile manufacturing building under one roof in the United States.

Famous inventor, scientist and entrepreneur Thomas A. Edison (1847–1931), briefly a resident of nearby Sunbury, established the Edison Illuminating Company of Shamokin in the fall of 1882. When the Shamokin power generating station on Independence Street started on September 22, 1883, St. Edward's Roman Catholic Church which was connected, became the first church in the world to be lit by electricity.

On Monday, October 5, 1925, The West End National Bank opened for business in temporary quarters in the Tye garage building on West Walnut Street near Second Street. A handsome floral offering was presented by the Philadelphia National Bank, James H. Kennedy, manager of the transit department of the Philadelphia bank and Howard Donaldson of the Federal Reserve bank system were assisting on opening day. The convenience of the new banking facilities was readily recognized by the businessmen and citizens of the western section of the city. Former district attorney Abe L. Snyder was president; S. John Bird and Joseph C. Taby, vice presidents; Henry Rumberger, cashier; and Nelson W. Woolcock, teller. The capitalization was $125,000 with a paid surplus of $62,500.

In January 1926, the directors reached a decision to let a contract to construct a modern banking facility of one-story on the corner lot on Walnut and Second Streets. In February Architect W. Douden of Washington, DC, was commissioned to prepare plans for the new building. Directors decided on a two-story building and accepted plans of William Douden. The choice of Mt. Vernon stone or limestone and brick would be determined later based on bids received. While opening was planned for December, a delay was caused by when the Indiana Limestone failed to arrive.

The first meeting of the board of directors in the new banking house occurred April 12, 1927. Public inspection was scheduled for Thursday, April 14th. The estimate was 4,000 people passed through the new home of the West End National Bank between 1 and 11 at night. The opening started with a flag raising by Councilman George O. Auman who raised Old Glory on the pole on the top of the building shortly before 1 o'clock. The Odd Fellows' orphanage band played patriotic selections while the flag ascended the pole. The Mosler safe with anti-dynamite doors was one of the more carefully inspected features.

On January 28, 1983, application was made seeking consent of the Comptroller of the Currency for the purchase of assets and assumption of certain of the liabilities of the West End National Bank of Shamokin by First National Trust Bank of Sunbury. On April 21, Robert F. Weis, vice president and treasurer of Weis Markets Inc., was elected chairman of the First National Trust Bank. Weis succeeded John A. Apple, president of Butter Krust Baking Co. Apple was chairman since 1974 and continued as a director, a position he held since 1950. Weis, a Sunbury resident was a bank director for 25 years. He was elected to the board of the former First National Bank of Sunbury in 1958.

Retrieved from "https://banknotehistory.mywikis.wiki/w/index.php?title=West_End_National_Bank,_Shamokin,_PA_(Charter_12805)&oldid=17947"
Categories:
Cookies help us deliver our services. By using our services, you agree to our use of cookies.