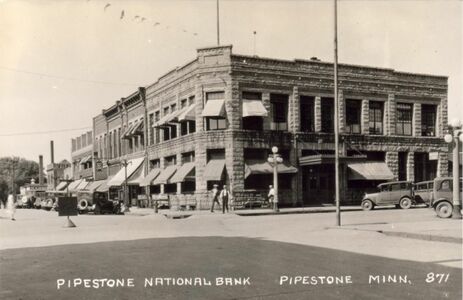 circa 1925 postcard of the Pipestone National Bank

The first bank in Pipestone was a private bank established by C.C. Goodnow and J.E. Craig in November of 1879.

In late 1929, the Pipestone National Bank (Charter 10936) was liquidated and reorganized under a new charter as the Pipestone National Bank (Charter 13399) to become affiliated with the First Bank Stock Corporation, a Minneapolis based holding company comprised of over 70 banks in the Ninth Federal Reserve District. As part of the reorganization, the bank increased its capitalization to $75,000, with a $25,000 surplus. The bank continued to be managed by the same officers, with an expanded board of directors. The reorganization was done to strengthen the bank financially, providing greater security to depositors, as well as offering additional banking services to the community. On Oct 1, 1984, the bank merged and became part of First National Bank of Luverne, MN (Charter 13544), which is currently (July 2021) still in business as the First Farmers and Merchants National Bank of Luverne, MN.

No National Bank Notes were issued by this bank.

Retrieved from "https://banknotehistory.mywikis.wiki/w/index.php?title=Pipestone_National_Bank,_Pipestone,_MN_(Charter_13399)&oldid=8577"
Categories:
Cookies help us deliver our services. By using our services, you agree to our use of cookies.