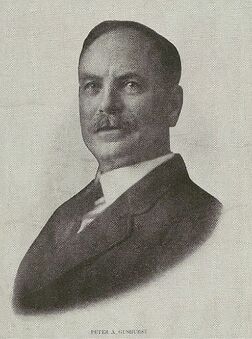 Peter A. Gushurst (August 21, 1853 – 1955) was an early pioneer in the Black Hills of Dakota Territory, arriving in Deadwood in late May of 1876. It had been his intention to prospect for gold, but on arriving he saw an opportunity, and opened a mercantile store. While in Deadwood, on August 2, 1876, he witnessed some 'wild west history' when he walked into the #10 saloon shortly after Wild Bill Hickok was shot and killed. By mid August he had moved up the gulch to Lead, where he opened up another store and settled down, living there for the next 57 years, before moving on to Denver, CO.

(Both Peter & Josephine lived to age 100+, and were the first couple to be married in Lead, SD).

"Peter A. Gushurst. The subject of this sketch was born at Rochester, New York, August 21, 1853, where he resided until he was 16 years of age when he came west, locating at Omaha, where he secured employment as timekeeper in the shops of the Union Pacific railroad; later he served an apprenticeship of four years in the machine shops of the same company. On the first day of May, 1876, he left Omaha for the Black Hills, arriving at Custer twenty days later and coming on up to the Northern Hills and locating at Deadwood the latter part of the same month. It was his intention on leaving Omaha to engage in prospecting on arriving here in the Hills, but upon reaching here he saw an opportunity to engage in mercantile pursuits, and he opened a store at Deadwood, which he conducted for a short time previous to coming to Lead and engaging in business. He arrived in Lead on the 15th of August, 1876, where he has ever since been engaged in the mercantile trade. In connection with his other business he has also engaged in mining to a very profitable extent.

Mr. Gushurst held the office of school treasurer for seven years, was chairman of the townsite committee, was one of the first aldermen of the city and served the city for two years as mayor. He is a member of the Pioneers' association, and is also a member of the Commercial club of the city, having served as its president for the past two years. He is also a director of the First National Bank of Lead.

Mr. Gushurst was married in Lead, May 26, 1878, to Miss Josephine Akey, she having come to the Hills the fall of '77 with her uncles, Fred and Moses Manuel."

During his banking career, P. A. Gushurst was involved with the following bank(s):

Retrieved from "https://banknotehistory.mywikis.wiki/w/index.php?title=Peter_Albert_Gushurst_(Lead,_SD)&oldid=7645"
Categories:
Cookies help us deliver our services. By using our services, you agree to our use of cookies.