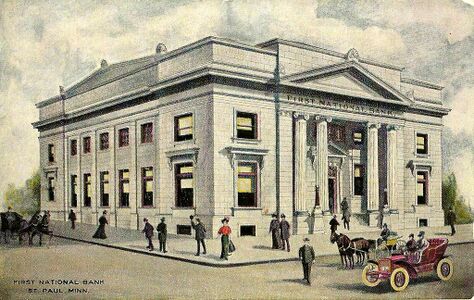 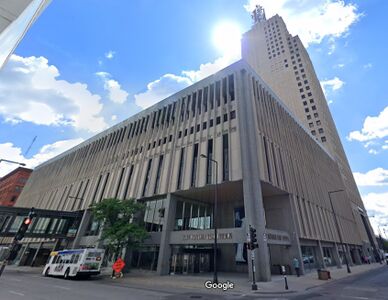 Saint Paul (abbreviated St. Paul) is the capital and second-most populous city of the U.S. state of Minnesota. It is located in the east central part of the state.

Saint Paul is the county seat of Ramsey County, the smallest and most densely populated county in Minnesota. The city lies mostly on the east bank of the Mississippi River in the area surrounding its point of confluence with the Minnesota River, and adjoins Minneapolis, the state's largest city. Known as the "Twin Cities", the two form the core of Minneapolis–Saint Paul, the 16th-largest metropolitan area in the United States, with about 3.6 million residents.

Founded near historic Native American settlements as a trading and transportation center, the city rose to prominence when it was named the capital of the Minnesota Territory in 1849. The Dakota name for Saint Paul is "Imnizaska". Regionally, the city is known for the Xcel Energy Center, home of the Minnesota Wild, and for the Science Museum of Minnesota.

The settlement originally began at present-day Lambert's Landing, but was known as Pig's Eye after Pierre "Pig's Eye" Parrant established a popular tavern there. When Lucien Galtier, the first Catholic pastor of the region, established the Log Chapel of Saint Paul (shortly thereafter to become the first location of the Cathedral of Saint Paul), he made it known that the settlement was now to be called by that name, as "Saint Paul as applied to a town or city was well appropriated, this monosyllable is short, sounds good, it is understood by all Christian denominations". 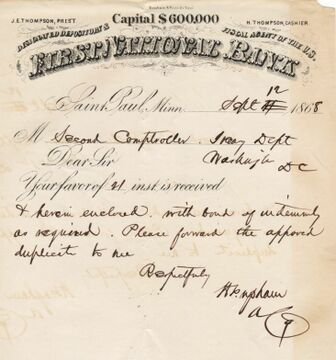 Retrieved from "https://banknotehistory.mywikis.wiki/w/index.php?title=First_National_Bank,_Saint_Paul,_MN_(Charter_203)&oldid=13558"
Categories:
Cookies help us deliver our services. By using our services, you agree to our use of cookies.